In physiotherapy, one of the most curious trends we see is the amount of patients who report having a “bad” back. Often this issue is longstanding, over many years and even decades.

What is even more curious, however, is that many of these patients presenting with a bad back have come to regard their symptoms as absolutely normal. Many accept that because they have had back problems for such a long time, “that’s just how it is”, and to expect improvement in either symptoms or functionality is unrealistic. Curious indeed!

With almost all injuries we see on a daily basis, there is a cause-effect relationship at play, the job of the physiotherapist essentially being to identify and address the cause, and treat the effect. When a patient mentions their “bad back”, we are obliged to press the patient for more detail to begin this process of investigation. Often, the patient will immediately use words such as “stiff”, “weak”, & “unstable” to describe how the back feels. Such words simply confirm that the individual does not in fact have a “bad back”, simply a back that is weak, stiff, not moving optimally etc.

This is where improvements can be gained – the source of symptoms has been identified, and can typically be addressed in a straightforward manner. Without wishing to oversimplify, the basic premise of treatment can simply involve strengthening a weakened back/hips, increasing the mobility of a stiff back, or retraining correct biomechanics with someone who has ceased moving their back in a natural way. Often, these simple interventions are sufficient to elicits marked improvements in symptoms, even after years of struggling with back pain. Associated treatments such as postural advice, ergonomic education, and guidance about a return to exercise or normal activities tend to augment these improvements.

Essentially, a “bad back” is often simply weak or stiff. Not “bad” at all actually!

It would be amiss, at this point, not to mention the whole murky area of lower back “wear and tear”, arthritis, or degeneration also. Many patients will readily attribute their back pain to their age, or to the fact that an x-ray taken at some point in recent history has shown wear and tear and bulging discs etc. Well of course it would! This degeneration if an absolutely natural process, one which we all go through. Being told we have wear and tear in our spines as we age is like being told we have grey hair or wrinkles!! The pertinent fact is that there has been shown to be a weak correlation between degeneration found on x-ray, and whether or not the patient experiences symptoms of lower back pain. 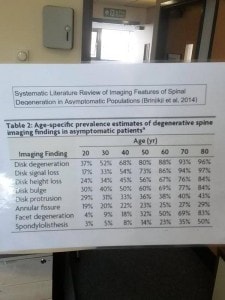 Patient 1, a man in his mid 50s, attended clinic with a 15 year history of a bad back, interfering with his golf and causing him to struggle to “get going” for the first 20 minutes in the morning. The gentleman was employed in a role where he drove several hundred miles each week, and was generally sat at his desk when not in his car. The patient had been to see several health professionals, as well as being reviewed by orthopaedics where he received a scan of his back. This scan showed moderate wear & tear of the lower lumbar joints. After full assessment, is was felt that the patient’s lifestyle was the direct cause of his back pain, rather than any intrinsic factors or acute medical processes. 3 sessions of hands-on physiotherapy later, alongside a course of mobility exercises to perform at home and advice on moving more regularly during his working day, and the patient was back playing golf unrestricted, & said that is back pain was no longer the first thing he thought of upon waking in the morning! So in this case, not a bad back in site, simply a stiff back being aggravated by prolonged static postures daily.

Patient 2, a lady in her 30s, presented to clinic having hurt her back upon tripping over her children’s toys at home. Due to this being her first episode of back pain, & the pain being hugely intense, the patient became very fearful of moving her back for fear of inducing such debilitating symptoms again. This lady stopped attending her weekly yoga class, began asking her family members to tie her shoe laces, & changed how she stood up from a low chair, all to avoid potentially harming her back. At clinic, the patient was hugely reluctant to move her back, and was unable to perform basic movements requiring even a baseline of back strength. Following a thorough assessment, no structural damage or medical concerns were identified. Essentially, by protecting the lower back following injury, the back had stiffened markedly and the back muscles had greatly weakened due to inactivity. What may have recovered from simply being a bruised and sore back, became much more problematic due to the deconditioning that resulted from this fearful response to injury – an entirely natural response to pain, and one we see on a regular basis. Once the involved pain mechanisms were explained to this lady, and reassurances were given that a progressive reintroduction of normal movement would not prove harmful, symptoms began to subside. These reassurances simply enables this lady to begin moving and exercising again, with this return to normal activities resulting in movement of stiffened joints, and strengthening of weakened muscles. These improvements were assisted by several physiotherapy treatments also, alongside a specific home exercise programme to restrengthen weakened areas. So once again, not a bad back to consider, simply a back that had become weak and stiff following injury, and needed reconditioned!

So, perhaps your back isn’t actually all that bad, & just needs some some attention from yourself and a highly qualified physiotherapist! Why not give us a call to book an appointment at any or our 5 clinical locations – Glasgow West End, Clarkston, Mosspark, Newton Mearns, & Kirkintilloch

Pilates Vs. Yoga…Thoughts of a Physiotherapist The Stages Of Normal Tissue Healing
Scroll to top