Should I Be Foam Rolling?

This self-release treatment has been growing in popularity over the last few years. With increasing numbers of gyms offering of different rollers to customers. Our physiotherapists are all big fans of foam rolling and often encourage patients and athletes to regularly roll areas which are symptomatic or prone to being problematic. We like it because it gives the user control of the pressure, location and length treatment. It also is a release technique which can be completed nearly anywhere, at home, the gym or even the side of a pool.

What Does Foam Actually Actually Do?

Foam rolling comes under the banner of self-myofascial release. The “myo” means muscle, the rolling over different layers and fibres of muscles can increase movement between structures, layers and muscle groups, reducing unwanted cross-links. During movement, muscles fibres must slide over one another, increasing this freedom of movement can help with length and contraction of muscle units.  It has also been suggested to increase blood flow to muscle groups which can help with performance.

“Fascial” refers to fascia, a connective tissue sheet which encases many muscle groups within the body. It is thought that fascia can become tight or become restricted, hence painful, around certain tissue or locations. Due to its structure, it is inelastic and thus does not respond well to traditional stretching. However, rolling of this tissue can increase its pliability, reducing pain and facilitating movement of the fascia and associated muscle groups.
Known Benefits

The evidence would suggest that foam rolling is not just a fad but a valuable tool that should be included into your warm up, cool down and recovery process. It can help increasing performance, flexibility and reducing pain levels. As a general rule of thumb when rolling; if you find a tender or painful spot within a muscle group, don’t avoid it or roll off it, rather stop and apply pressure for 10-15 seconds. These spots can often be the driving force behind muscle tightness or pain and applying static pressure can be effective at releasing it. Often the patients are unsure how to foam roll key muscle groups or where to start. Ideally, your physiotherapist can show you during treatment sessions but below are some simple starting points for key muscle groups. 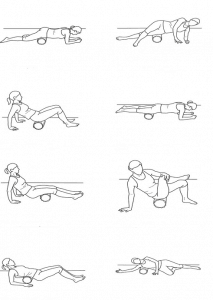