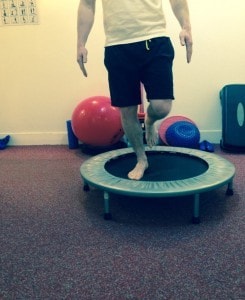 A ligaments is a taut bands of dense, fibrous connective tissue, which joins two bones or layers of cartilage. Due to its position between these two bones, and hence over the joint they create, the ligament serves as a prime passive stabiliser of the involved joint, facilitating normal movement while also preventing excessive amounts of this movement.

How Do Ligaments Work?

Ligaments are somewhat flexible, hence they allow for a certain amount of above-normal movement of a joint. Once this movement threatens to continue to the point of possible injury however, movement is restricted by the dense, taut nature of the ligament. This restriction is the prime function of the ligament – to prevent an amount of joint movement which may induce injury.

How Does The Ligament Itself Get Injured?

Ligament injuries are commonly seen in contact sports, falls from mountain bikes, road traffic accidents etc. Such is the case, as the inertia of the high intensity impact exceeds the load the ligament is capable of absorbing naturally, resulting in injury.

What Areas Are Most Commonly Affected With This Condition?
At K.M. Woods Physiotherapy, several joints are typically most implicated when ligament injuries are concerned. Ankle inversion injuries, where the ankle rolls inwards hence straining the ligaments as the outside of the ankle, are very common, especially in football and basketball. Knee ligament injuries are common also, again often during sporting pursuits, be it the MCL or LCL, or the more serious ACL (Anterior Cruciate Ligament). Falls over handlebars of bikes, or attempting to break a fall by placing the hand out in front, will occasionally lead to ligament injuries to the shoulder or collar bone.

How Do Ligament Injuries Present?
Typically, the patient can identify the specific trauma or incident which caused the injury initially, and this can prove a huge help to the physiotherapist in diagnosing a ligament injury. Ligament injuries typically present with localised pain about the area of the implicated ligament, with adjacent swelling also notable. Symptoms will usually be exacerbated when a particular movement is undertaken which stresses the injured ligament, such as twisting of the knee in knee ligament injuries, or walking over uneven ground in ankle ligament injuries. Instability can also be reported in the implicated joint or body part, as the usually solid ligament fails to support even normal movement.

How Can Physiotherapy Help
Many physiotherapy treatments have been shown to be successful in their treatment of ligament injuries. Treatment is tailored to suit the individual patient, following a thorough assessment. Treatment may include

What Can I Do To Help This Condition Myself?
Prior to, or while attending physiotherapy, the patient can also help the recovery process by following several steps